A bad week Laverda wise as the Atlas failed to start Monday evening when I went to leave work for home. Not only would the bike not start due to an apparent flat battery but when I went to bump start it there seemed to be no gears! A trip on the back of a recovery lorry from London…

My focus was on the lack of gears as the battery charged up and my initial thoughts were that the clutch had finally given up – I didn’t feel this was quite right in that although the clutch had a tendancy to slip it wasn’t ‘so bad’.

Simple to get the clutch off and measuring the plates and springs showed both had wear. The plates were down on standard but no unexpectedly – it was probably moe surprising that the cork insert patterns were not flat but still had some meat. The springs were noticebly longer and I think these rather than the plates were causing slack. I reassembled but still no gears so I turned my attention to the drive side.

When I first got the bike it had a non-standard 420 chain/sprocket setup which I replaced with 530. However before doing this there was an occasion when the drive sprocket slipped into the mainshaft well that retains the lock washer giving the appearance of no gears. I’d hoped the mainshaft wasn’t damaged but afraid not because the ‘well’ was now wide enough to take a 530 sprocket! A rummage in the cupboard came up with a new drive sprocket and two lock washers and all should be fixed. 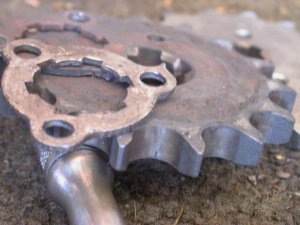 As an aside the new sprocket has three locking bolts – supplied by Slater’s I picked up from somewhere that it is infact a standard part for a Kawasaki. Must do some research to see if a cheap source can be found.

Final nail in the coffin however was that it still wouldn’t start – no enough umph in the battery and when it did fire only on one. I gave up and resigned myself to another week on the VFR…

No VFR days this week as the Atlas rolled in and out of London with no issues…other than an oily fog when I came to a halt at traffic lights. The homemade gasket was not quite doing its job so Saturday morning was taken up cutting out a fresh one. I took my time with this and ended up with something that was a lot neater and hopefully oil tight. Time will tell.

While I was fiddling with the Atlas I also decided to take a look at the rear brake pads which the MOT man had suspected were low. Hmmm barely any pad material left on ’em and luckily I had a new set on the shelf so job done!

Didn’t need to go into the alternator casing but did manage to get some hardened washers for the idler gear from the local KTM shop. Not sure where these shims go in a KTM engine but they’re just the ticket!

There’s a few things that need attention on the Atlas – head bearings seem to have loosened off, headlamp fairing needs to go on, indicators don’t work and the bolt holding the clutch lever needs a nut. All small beer and hopefully I can just get on and ride it for a few months now.

Put a bit of focus on the RGS. Checked to see if the brake light works and it doesn’t – damn not sure why this is the case but suspect it’ll be linked to a poor earth. I’ll have to spend time over the week with the multi-meter checking this out. I also got to start cleaning it some more – there is lots of damage cased by road salt and brake fluid which has lifted the frame paint. Aside from the brake light and touching in the frame there didn’t ought to be a whole lot to do to get this roadworthy… 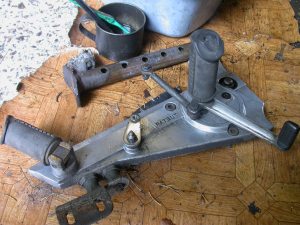 Finally sent off a piston to help with the Jota crank balancing.

A couple of VFR days but I don’t grudge that as the Atlas was being fixed by visiting American Laverda mechanic Scott Potter.

Scott got to work on the Atlas and fixed the starting problem with new plugs and trimming the ends of the HT leads. Scott also went into the motor and replaced the camchain and checked the clearances (which were not too badly out).

In addition to the Atlas Scott also set his sights on the RGS front brakes which he bled up for me. The trick was to take the master cylinder off the bars and tap with a wooden mallet to get air out of the lines. Now the brakes are sorted there isn’t that much left to get this back on the road – this will now be my focus.

The big ticket though was getting the Jota engine out of the frame and dismantled. The engine has sat in the frame for more than 5 years as doubts were put in my mind about the condition of the conrods.

My caution was fully justified when the crank was inspected. The conrods had been dressed by a grinder going across and not down the length which would introduce stressors all the way down. There was also a lot of evidence of balancing which appeared untidy if not terminal!

Another major concern was the centre pin which had been pushed too far into the web – the end as you can see has been pressed past ‘flush’.

Anyways all this can be resolved with some secondhand rods and a new balance and bearing package. This will take two months so the race is on to get everything else ready in time for the autumn build-up.

This week was the National Rally weekend. Go to the ‘Trips’ section to read the full report of the Special Gold attempt – that’s 540 miles and 22 checkpoints in 20 hours on the Laverda 100.

Some additional background was the work that had to go into making the bike roadworthy. The main issue was getting the lights to work and then getting the brake light to work at the same time as the lights are on. The problem is that the generator only puts out 21 watts and the headlight beam alone is 25! The solution was a 6 volt torch battery hidden in the tool box. 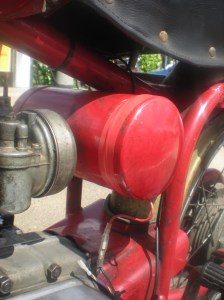 The lights were a big consideration as they have failed in the last two attempts. I got the lights running well and in additional ran an auxillary line so that should they fail I could plumb all the lights into the 6 volt battery – you can see a spare wire just above the crankcases.

The forks almost cost me my roadworthiness test as the bushes have a lot of wear. Lucky the tester got slightly distracted by the over tight headstock bearings and I think he wanted to give it a ticket so said the worn bushes were ‘advisory’…