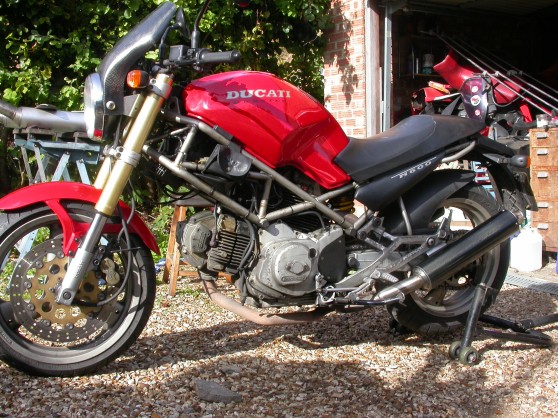 No work on the Laverda fleet to report – been fettling my daughter’s Ducati Monster and out riding with her.

The ’94 Ducati is one of the very first Monster series. Catherine’s bike has a good service history and just 34,000 miles on the bores. The downside is poor paint on the frame, footrest hangers and engine. It’s been interesting to compare the Monster against the Atlas which runs a similarly ‘soft’ motor unlike the 650 Zane which is its contempory.

The Ducati engine has more torque but the small valve head seems to stop it revving out at the top end. The Atlas is therefore quicker flat out but in the real world for these bikes which is in the 70 mph zone the Ducati is stronger. The Ducati reminds me of my old British 650 in terms of its physical size and the way it delivers power and how easy it is to work on. It made me smile to myself to find that the Ducati has a dynojet kit (remember those) and that running the standard silencers put the carbs in conflict with the exhaust. Fitting the Bos carbon cans immediately liberated 10% more speed:-) Similarly a change from Champion to NGK plugs cured a minor misfire at high revs. Simple, schoolboy mechanics and quite refreshing.

The Atlas on the other hand feels more Japanese with the little 8 valve parallel twin howling away and even in this soft state of tune requiring revs else it will bog down (mind the Ducati similarly needs to be in the right gear). Where the Atlas also runs up short is the quality of the cycle parts. The Ducati benefits from being from the 90’s not the 80’s in this regard – it feels like it is looking forward to the next era in terms of suspension and frame. Again the Zane alternative addresses this whereas the Atlas feels like a cheap build blinged up with gold wheels and swinging arm. The brakes are cheap as are the plastics and instruments.

So I’m a bit smitten by the Ducati, especially as they can be found cheaply (a 750 Monster would be ideal) and seem to have a strong owners club. If I was starting out again then my guess is I’d be likely to buy a cheap Monster as my way into Italian ownership (which is how I came to own a Jota at just £1250 in 1987). Laverda unfortunately has become a defunct marque and the ever increasing prices work against attracting younger riders who someday might grow into a 3CL or an RGS. It makes me think who will want to buy all my bikes once I’m too old and need to pass on the baton…? How are we growing the next generation of Laverdisti?

Back in the garage next week I promise. 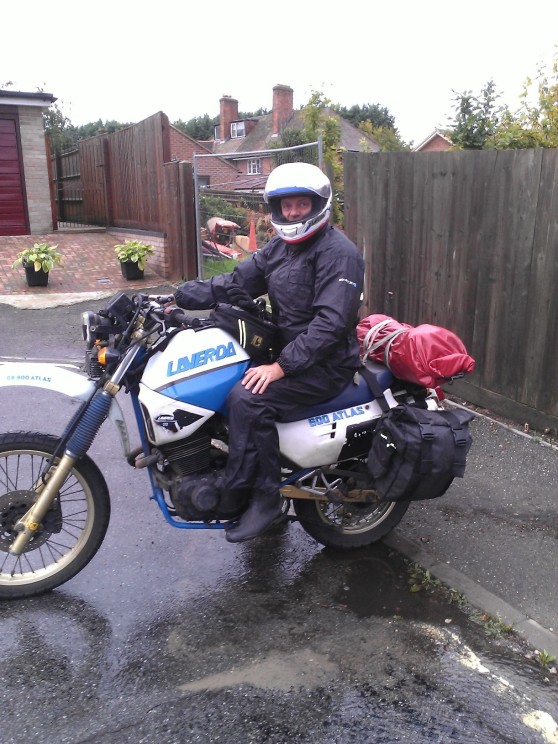 Nothing to report from the garage as this weekend was taken up with the i Laverdisti Belgi rally in Achtel near Hoogstraten.

Go to the Trips section for the story and pictures.

So the push is on to get Atlas #2 back on the road.

Put the original tank on (as opposed to the one off Atlas #1 that I’d been using) and checked over the lights. All checked out bar the front right but with a bit of fiddling all was good. Needed to replace the horn with one I had spare. The biggest headache is the headlamp mounting bracket which continues to resist all attempts to glue the retaining spigot in place. Resorted to an intermediary fibre washer… 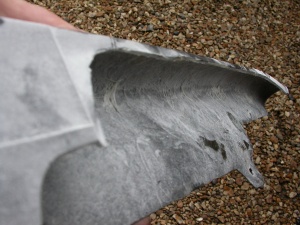 Had to cut the back out of a fibreglass replica chainguard I have to make it fit without fouling the chain. The replica wasn’t made square and gradually got narrower so it had to be cut. You can’t see the modification and as the chainguard is just there to prevent muck flying off the chain as opposed to preventing the chain damaging the bike in the event of it snapping (as would be the case with a metal job) I’m not concerned.

Installed the battery from Atlas #3 and…it failed to start? Tank off and sure enough a wire was out on the black box so back in and…nothing. Tank off again and this time I put the wire in the correct slot on the black box and bingo! Bike started well but the revs increased when I turned the bars so tank off again. I fiddled with the cable adjusters and checked the run but the problem turned out to be that I’d zip-tied the throttle cable to the oil cooler hose. When the bars are turned (on a Mk 3 Atlas) the hose moves and so was opening the throttle. Cut the tie and we’re good to go.

The first ride was up to the MOT station – what a difference between the two Atlas’s. Atlas #2 sits a lot higher – partly because of the off-road biased tyres with the rear sporting a 90 as opposed to 80 sidewall height. In addition though the rear shock on Atlas #2 is in better condition and felt higher. The hydraulic clutch is also lighter…but the engine on Atlas #3 feels smoother and stronger. Anyhow there is a happy ending with Atlas #2 passing its MOT with no advisories :-).  I’m now in the position of having two Laverda’s at my disposal. I intend to return to running Atlas #2 for day-to-day duties and save Atlas #3 for rallies as it has the pannier frames fitted. 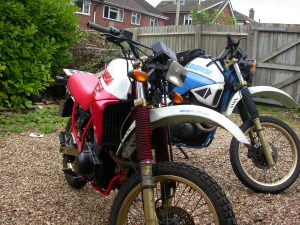 PS Malcolm Cox is making up exhaust systems for the Mk 3 Atlas (unobtainable). If you want a system email him at coxeng@gmx.com quickly as he is making just one batch.

Not too much progress this week but did take a wobble over to the ILOC Rally at Baskerville Hall. It’s become a bit of a tradition to visit in the afternoon, catch up with friends and look at the bikes before heading home. It’s a round trip of maybe 250 miles so easily done in a day.

Unfortunately the weather was against us so we retreated to Hay on Wye for hot soup and cake 🙂 Looking at the map I saw that Hergest Ridge is just up the road so we got a copy of the Mike Oldfield album from a second hand shop and headed up the road for a photo-shoot. The plus side is that it’s not a bad album so a win all round. 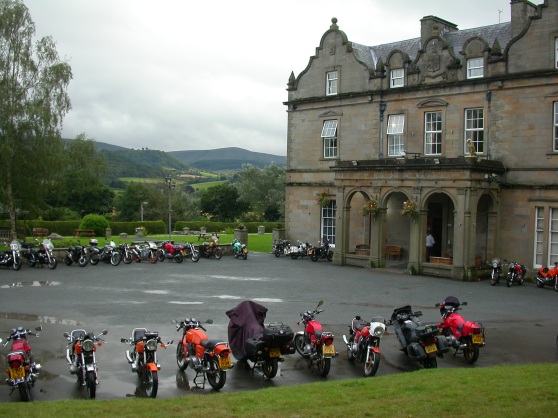 There were about 50 motorcycles present and as is the modern way about 50% of them Laverda. Each year throws up a new trend and this year it seemed to be the return of the orange and silver Jota – Alan Bell excepted with his ‘Peppermint’ beastie. 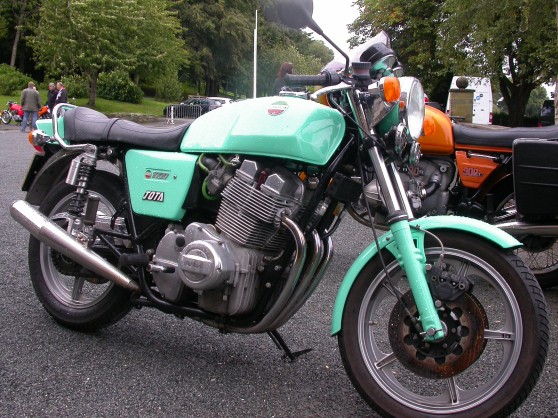 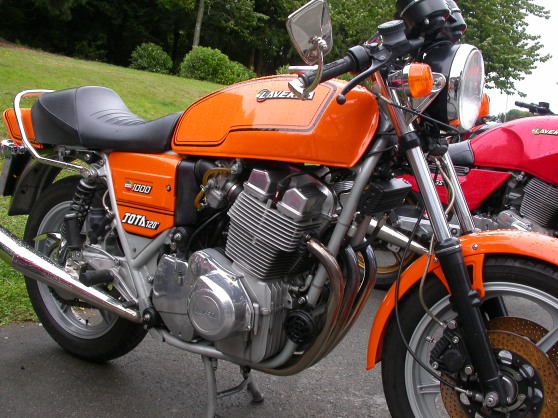 This 120 Jota was my favourite as it had been clothed as a Series 2 Jota – the original clocks are retained and sit a little high but that’s just nit-picking. This is what the 120 Jota should’ve looked like!

A small amount of progress was made on Atlas #2 with the sidepanel ready to go back on – it will still need fettling to get all the scratches out but it’s ‘good enough’. Atlas #3 continues to give good service but the damned gear return spring is failing – it doesn’t return back to 1st or 2nd but otherwise is okay. At the moment I don’t want to take the primary case off so will get by giving the change lever a little intermediary tap between changes. The other thing is that with the arrival of autumn the battery is beginning to fail. These Harley batteries are good but they don’t last more than a year on an Atlas – the good news is that they come with a two year warranty!