Got space in the garage with the sale of Catherine’s Yamaha and my old workhorse the VFR800 that carried me 60,000 miles. 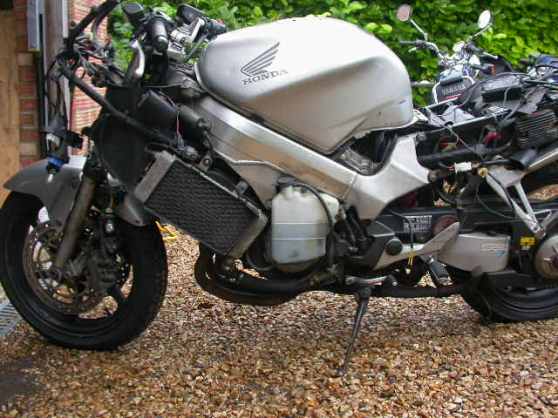 Returned to the final piece of damage caused by my crash in April (the broken thumb is doing fine btw). A bolt holding a radiator cover that hangs off the bottom of the petrol tank is turning in its thread. First step was to grind the bolt head round to get the cover off and then begin spraying with WC40. I’d hoped the bolt would come out but no such luck, it’s still spinning. I intend to try out the ultra cold spray to see if expansion/contraction will break the bond – no need to hurry as Atlas #2 and 3 are both on the road.

So the focus turns to the RGA project. Where to start? Decided to begin on the carburettors and pistons, both of which gave me a chance to try out the ultrasonic cleaner. The pistons seemed in good condition but had carbon on the crowns and some blow by on the ring grooves. 20 minutes in the cleaner and they seem like new.

The carburetors are relatively clean on the outside but it was time to open them up. I’ve decided to work through the carbs’ one at a time because I’d like to try and keep the same bits on the carbs rather then mix them about. Also as there are three carbs I figure it best not to just end up with a massive bags of bits!

The float and bowls seemed clean but the top of the carb’ with the opening mechanism was furry and the jets a bit black. I had to apply heat to one of the choke guides to get the bolt to undo but all in all dismantling was quite straightforward.

However despite the grot in the carb’ there appears to be little wear other than on the synchronization bar where the chrome has worn – not sure if this matters, if you know the answer let me know.

What is worn however are the brackets, fasteners and springs which have their finish ruined by all year riding. Again I need to take advice on the most cost effective way to get these back to standard. 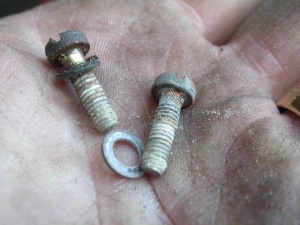 So feels good to be working on a triple and hopefully just have to apply routine maintenance to the Atlas twins. The autumn weather is certainly with us so need to crack on as working outside will soon become a luxury.