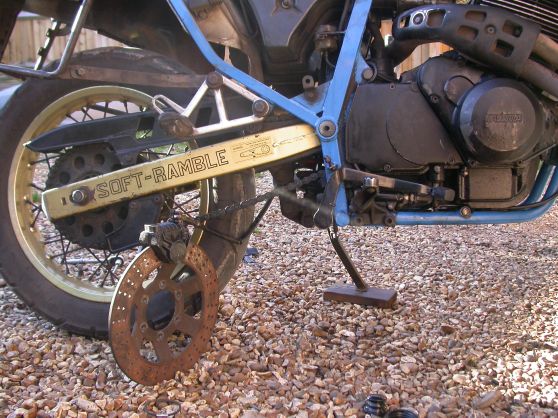 I’d let the schedule slide so that the work to get the Atlas ready for the French AG in Chartres was becoming urgent. The engine was in one piece and running and starting well on the fresh ignition curve (#3). There was still a little hesitation at tick over but the engine had more punch and ran more smoothly. The clutch wasn’t slipping but was dragging. I adjusted it at the bar as I couldn’t be bothered to take off the case and gain more adjustment at the engine end of things.

The main problem to solve was the back brake which refused to bleed up equally across both pistons. I got both pistons working but the outer piston was a bit lazy and came out after the inner. I worked out that if I held the inner then the outer came out so figured that once the inner had hit the disc then the outer would follow and everything would be okay…

Initially I had the bike up on the bench so could get the union at the lowest point but once I’d been for a run round the block (with the bleed nipple not done up tight so all the fluid leaked out) I did it on the ground and pressed an old RGA disc into service. 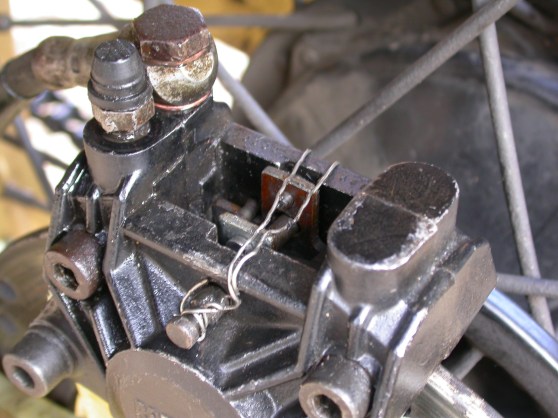 It all seemed good to go and then I noticed that the pin holding the pads rattled in the housing. This happens over time (even had it happen on my RGA) and a way back I’d had problems when the pin went AWOL and locked the back wheel! As the picture shows I wired the pin in place but my contingency was to also just not use the back brake (anyone riding from the 1970’s knows a back brake is there just for show…). And that’s how it ended up being.

The final pieces of the jigsaw was fresh oil and this time Rock 20/50 which ought to play nicely with the clutch and a liberal coating of ACF 50 anti corrosion spray.