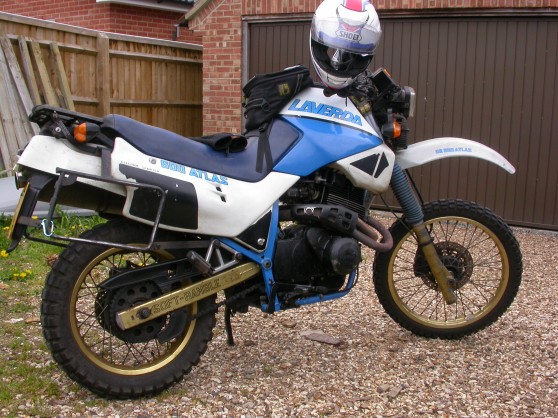 Since the last post not too much has happened on the Atlas but I have had a trip down to the 24 Hours race in Le Mans – full report over in the Trips section.

The latest picture of the Atlas shows it ready for its annual roadworthiness test (MOT).

I agonised over the speedo which doesn’t work because the drive in the front wheel has sheared (common problem). 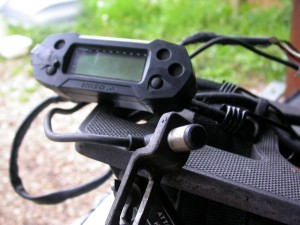 I fitted the digital speedo from Atlas #1 only to find out that it doesn’t work! I kind of remember that perhaps the sensor got hit by the magnets in the front wheel…

Having failed on that score I ordered up what I thought was a replacement digital unit only to find it was mechanical. In the end I decided that the MOT specifies that the speedo must be fitted and illuminated but it isn’t checked to see that it works. To guard against failure I left the satnav in place and was ready to argue that this is my speedo!

I bled the back brake to see if I could get it to bite a bit more. Some air came out of the system and it worked well on the bench. On the road however it must be said the back brake is still pretty feeble which seems to be a bit of a Laverda tradition!

Having decided not to worry about the speedo I slipped on the chunky off road tyres so there could be no doubting the depth of thread!

It passed with no advisories 🙂 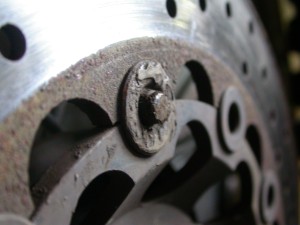 A consequence of all this work was that I used the digital speedo wheel for the trip to Le Mans. The tyre on this wheel had more thread and also the brake disc had less wear in the bobbins. However I only discovered as I rode down to Portsmouth en route to Le Mans that the disc is warped!!! It was a minor irritation as braking into roundabouts was a bit fraught with the bars shaking their head…back to the shed I guess!