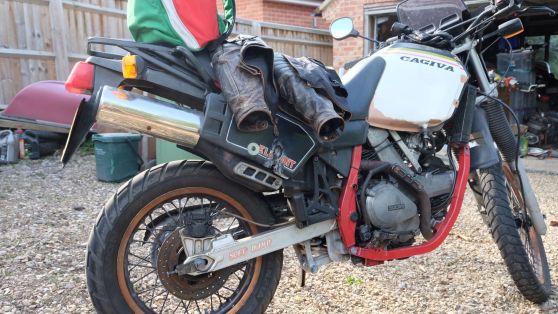 Elefant in the house

So a good week, made so by the arrival of a guest mechanic! Pete turned up on his Cagiva armed with a set of Stillson’s to sort out the busted stud.

The Elefant is worth a quick look. I was surprised that it pre-dates the Atlas bikes by at least a year. I’d thought the Atlas was the first Italian ‘XT’ but you’d have to admit Cagiva got their first. Laverda used the Elefant formula with a heavy steel frame, cheap plastics and instruments and a recycled ‘street’ motor. The Elefant looks like an even heavier bike with marginally more substantial forks, swinging arm and frame (square tube as you can see) and similar rear suspension ‘Soft Damp’ as opposed to ‘Soft Ramble’. In straight comparison I think the Cagiva is the better bike mainly on account of the stronger engine (tho’ Pete’s isn’t the original Cagiva lump).

So with plenty of the stud proud of the cylinder head Pete marched in with his Stillson’s and voila it moved and in a minute was out!

I’d planned ahead and had a nice selection of parts from OCT including a new stud.

Thanks OCT – dig the complimentary sticker and 3C calendar 🙂

The new stud went in with no hassle and was tightened in place using the ‘2 nuts’ technique (oooh er!). All this progress presents an interesting, and unexpected, situation – I could end up with two Atlas’s ready for the road!!! I’d switched my attention to Atlas #1 but now Atlas #3 is back in contention too. I’ve put the cams from Atlas #3 in to #1 so they will need swapping out and the cams from the spare motor pressed in to action (the cam journals on Atlas #1 being pitted) but that aside both are shimmed up and once cam chains linked they’re ready to go.

I’d left the Atlas #1 story with some seized in primary case allen bolts. Pete the mechanic has kindly left me some citric acid powder that I can mix with hot water to try out. At the moment I’m holding that in reserve and waiting to see if ‘Noxudol 4’ can do the trick. So far 2 out of the 4 seized bolts have indeed shifted so I will give this a bit more time. The allen bolts however continue to be stuck in the cam cover of Atlas #2. I’m learning however that patience is a virtue when it comes to seized bolts so will leave it a while longer before the citrus brew is applied. 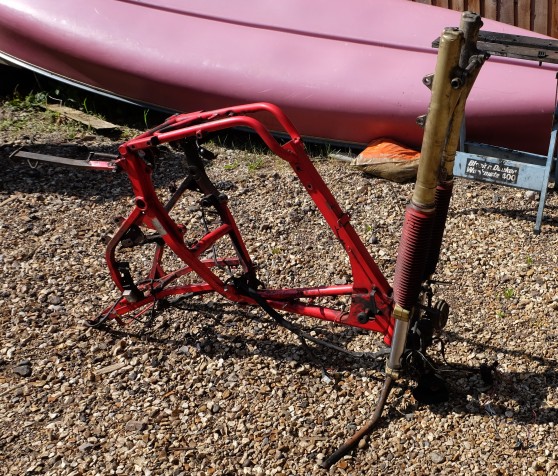 I’m not trying to get a concours finish. I just want enough paint to ward off too much rust for the time being. I had a tin of Aprilia gold frame paint in the shed and some ‘signal red’ enamel laying about so got to it. The results look okay from 10 metres… 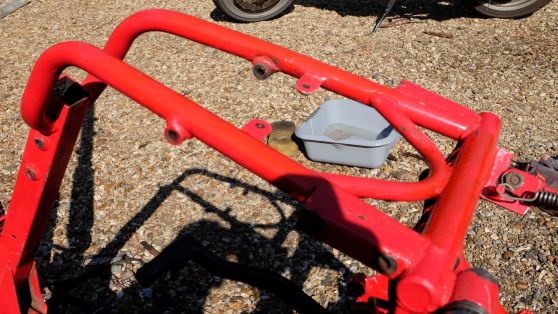 It’s difficult to show the different red’s but if you compare the downtube to the cross-member that the side stand hangs from you can see it’s not a perfect match. Still most of the red paint won’t be seen, is better than rust and let’s face it once I’ve covered it all in road dirt it’ll be academic. I don’t intend to renovate any panels or the tank so it’ll be ‘shabby chic’ at best.