Well took a step along the way to getting the Atlas back on the road by pulling the engine out. Feels a bit like two steps forward and three steps back but decided the engine that gave up in Scotland is going to need some serious fettling so the only answer is to get the original motor back in.

The original motor is waiting for the head and barrels to come back from the engine shop and then it can be put back together and bingo!

Pulling the engine was quite an easy task with the help of the hoist. I pulled it out the alternator side of the frame by turning it sideways – I seem to remember last time I did the same thing but it pulled it out from the primary side. Either way with a hoist it is simple.

Once the engine was out I got down to cleaning the frame up. Seeing all the oil build up behind the engine made me feel better with my decision as the only place that quantity could’ve come from is the breather so something is wrong.

So prep’d and ready to go we will be back on the road by the time I post again. 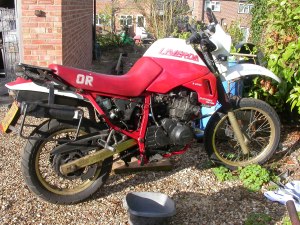 The Atlas is back!

Delivered via courier van from Glasgow the Atlas has returned. Unfortunately the key wasn’t in the bike so it can’t started but this hasn’t stopped me having a poke about to see if there is something in the motor I’ve missed and can fix without a complete engine swop.

Took off the alternator case and can see that the Zane sprag has some side to side play which I can shim out. It might have made the noise but then it was like this from the outset so unlikely – but worth putting right for when it does run again. I checked over the balancer shaft and this is fine, no play or loose cogs. Next weekend I will strip out the primary side but this was taken apart in Glasgow and nothing found. I really need to get the thing to go again…

So Plan A – it isn’t really broken has yet to be fully explored.

Plan B – refurbish the original engine is progressing. Word came back from the engineering firm working on the head and barrels that fresh piston rings have arrived and the bores are okay following a light hone. The head has a new inlet valve seat and refaced valves. I had to supply some fresh valve stem seals (on both inlet and exhaust for the eight valve engine) which at £6.95 + VAT and postage will add an additional bill of around £100! Interestingly the seals Slater Laverda is sending are from a Honda and need a tad of Loctite 407 to fit (OCT in Germany supply the seals [presumably not Honda] for just €4,52 each).

To add the finishing touches I need a tube of Loctite 518 to seal the crankcases, three oil seals, piston ring clamps and a fresh set of allen bolts for the cam cover and outer cases – luckily the Kempton Autojumble is this coming weekend. I’ve also repainted the crankcases with cylinder black (handpaint so not a great finish but cheap and it’ll keep the road salt at bay). 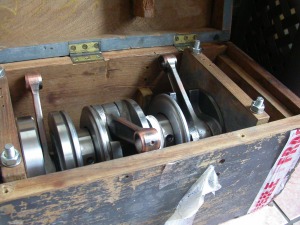 Crank in a box

All the action hasn’t been solely Atlas related as the deal with the Atlas was to also send down a rebuilt crank. The above is as delivered by Keith Nairn. I had a nasty shock at the state of the crank which had been sat under the bench and looked and felt okay to me. Keith reported that he had to replace three cheeks. The centre section 4 with cam drive had spun it’s main bearing rendering the mainshaft no good, centre section 5 had damage to the crankpin and the drive side crank end had been eaten away by the connecting rod! Just shows if you don’t know what you’re looking hey – I’d considered putting it in the RGA as was!!!

I also got feedback on the rebuilt Jota crankshaft – as Keith says  ‘If a 180 crank is in phase the ground steel bar should pass easily through all three little end eyes, as you can see from the picture….. 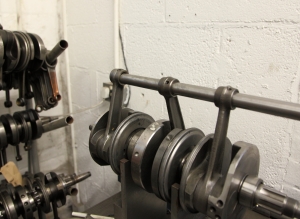 all the rods should be vertical…

A lot of cleaning going on this weekend and the final piece of dismantling which was to remove the pistons from the con-rods thus enabling the top case and crank to be parted. 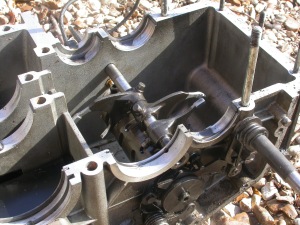 The head, pistons and barrels were taken off to the local engineering firm for inspection and repair. I didn’t take the valves out of the head so I don’t know if there is any problem there. The engineer however commented that ‘something’ had been in contact with the head around the valve buckets and we concluded that this could only be the outer edges of the cam. I need to inspect the cams to see if this is the case – the steel cams would damage the alloy head rather than visa versa but if it is the cams touching then there will be some damage.

The bores look okay, no scoring or lip so fingers crossed that they can honed and a fresh set of rings used. The pistons have some minor scores but look serviceable. Once I know the state of play with the bores I can decide the next steps – obviously a rebore needs new pistons but if there is life in the bores I will compare the cost of a complete piston set against the cost of just rings. The only note of caution from the engineer was that some of the score lines looked to be slightly diagonal which could indicate a slightly bent rod!

Look at the retaining washer groove at the end of the shaft to see the wear. Left hand shaft is way too wide!

While the engineer is working away he’s also going to see if he can source replacement car rings for the RGS – much cheaper. Should have his report back by Tuesday and can then get on with sourcing parts and building the motor back up. The busted Atlas may be back within the fortnight so I’m keen to have made progress on the engine before it returns.